Rock Crawling Tips to Help you Crawl Like a Pro!

Getting into rock crawling as a beginner can be a pretty daunting task.  You've probably seen the pictures all over the internet of trucks climbing what seems like impossible terrain, and wondered how can I do that in my truck.

Well don't worry, because as you know, EZ Wheeler is here to help you with all of your off roading endeavors.

Here at EZ Wheeler we remember what it feels like to a be a beginner,  which made it easy for us to compile a list of the best rock crawling tips.  If you are just getting into rock crawling then these are some must read tips.

When crawling over the rocks, it is not uncommon to lift a tire off the ground.  With an open differential, all of the power takes the path of least resistance, leaving you sitting still while the airborne tire spins.  Locking differentials force both tires to turn at the same rate, regardless if they are in the air or wedged against a ledge.  Limited slip differentials, particularly those that come from the factory, are rarely of much use in the rocks.  Lockers come in two basic varieties: automatic and selectable.  Selectable lockers, such as the ARB Air Locker and Eaton E-Locker, use air or electricity to switch from an open differential to a fully locked differential with the flip of a switch.  Automatic lockers, as the name implies, require no additional input from the driver.

The advantage to selectable lockers is that they can be unlocked for street use or for improved turning (when used in the front end) so they don’t have any quirky handling or tire wear issues on the street.  They trade off is that they are generally more expensive and complicated than automatic lockers, which could leave you without a locking differential when you need it most.

Try to Stay in Low Gears

More than horsepower, gearing is needed on the rocks in order to maintain control.  Going slower is easier on all components from the suspension to the drivetrain to the driver.  Instead of barreling up or down obstacles with little control, a low (numerically high) crawl ratio allows you to overcome terrain without the tires losing traction on the rocks.  Crawl ratio is calculated by multiplying the first gear ratio of the transmission by the low gear of the transfer case by the gear ratio in the differential.

A lower crawl ratio can be accomplished a variety of ways, including lower differential gears, swapping in a transmission with a lower first gear, dual transfer cases, or using a transfer case with a lower low range.  Ideal crawl ratios with an automatic transmission are around 75:1, while those with manual transmissions will want something closer to 150:1.  Automatics can get away with a numerically lower crawl ratio due to the multiplication of the torque convertor.  However you do it, gearing down your rig will help your clutch or torque convertor live a long, healthy life and give you increased capabilities.

Make Sure you Air Down the Tires

While 30 psi might be appropriate for the street, it results in a rough ride and reduced traction in the rocks.  Airing the tires down to lower pressures allows for a wider contact patch and better conformation tothe terrain.  Don’t air down to single digits unless you have a way to air the tires back up at the end of the trail and have beadlocks to keep the tires on the rim.

Keeping all four tires on the ground provides increased stability, and if you don’t have lockers it can mean the difference between making it through an obstacle under your own power or on the hook of a winch.  During the early 90s it was trendy to have a suspension capable of jaw-dropping flex, but sometimes there can be too much of a good thing.  The trend is now towards balanced suspension flex front and rear with coilovers, triangulated four links, and sway bars.  Coil springs, such as those used on Jeep Wranglers, and even leaf springs can be made to work quite well in the rocks.

Try to Keep Your Tires on the Rocks

If you are new to rock crawling you might be tempted to try and straddle a rock.  As the obstacles get larger though, you will realize that you need to keep your tires on top of the rocks in order to keep from getting high centered or damaging the undercarriage.

Armor Up Your Vehicle

In a battle between rocks and sheet metal, the rocks rarely lose.  Rocker guards, skid plates, and bumpers manufactured from plate steel and tube are used to fend off the rocks so you can still open and close your doors at the end of the trail.  Look for additional features when shopping for armor, such as front bumpers that accept a winch, rear bumpers that double as spare tire carriers, and skid plates that provide additional ground clearance.  Large, bulky bumpers might be great for working in the oilfield, but they will kill your approach (in the front) and departure (in the rear) angles.   Ideally, when in the rocks, you want the tires to be the furthest thing forward and back.  Also pass on the flimsy tubular “nerf bars” and bumpers, as they bend easily and rob ground clearance.

The downside of all that torque multiplication from low gearing is that it tends to break drivetrain components, particularly axle shafts.  Aftermarket shafts and u-joints made from better-than-stock materials are helpful if breakage becomes an issue.  Another option is heavier duty axles; many one-ton axles have been slung under Jeeps over the years.  These wider axles also offer increased stability, but the width limits the choice of where you can go in really tight terrain.  Consider what tire size you want to run before spending money to regear or add lockers to your stock axles if you think they might not be strong enough to withstand your intended use.

Driveshafts are worth noting as well.  Aftermarket driveshafts with larger u-joints (and the accompanying yoke) and heavier wall tubing ensure that all that torque is transmitted from the transfer case to the axles.  Driveline strength is particularly important for long wheelbase vehicles and axles with a low pinion (like the Ford 9”), since they are more susceptible to impacts with rocks.

Always Use a Spotter

Rock crawling might be a testosterone fueled pastime, but even the best drivers still use a spotter in technical terrain.  An extra set of eyes can help keep the driver calm and can see tires, differentials, and rocks from a different vantage point.  Just make certain that you have your communication clear between driver and spotter or you could make the situation worse.  It is best to have just one person spotting, and if the driver can see the spotter stick to hand signals, which are easier to discern that verbal communication.

Choosing a wheelbase is often a compromise that depends on the type of terrain you plan to traverse.  What works on the huge dry climbs of the Southwest isn’t necessarily the best for the tight tree-lined trails of the Pacific Northwest.  Increased wheelbase typically provides increased stability at the expense of breakover angle and maneuverability.  Also consider drivetrain length in relation to wheelbase.  Dual transfer cases and automatic transmissions can contribute to severe driveshaft angles in short wheelbase vehicles.

Low gears and locking differentials transmit a tremendous amount of torque though the axles.  Sometimes when trying to force the tires over ledges and rocks, the axles will break before traction gives way.  Typically the drivetrain will bind and the engine will want to stall before reaching the breaking point.  Instead of forging ahead, back off and attempt a different line before breakage occurs.  Another common occurrence with vehicles equipped with leaf springs is for the rear axle to hop as the torque twists the springs.  This hopping causes shock loads that spell certain death for axles and should be avoided at all costs. 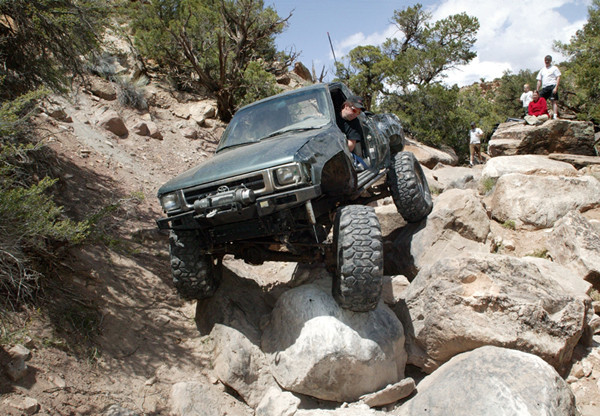